Planina Cave is located on the southern fringes of the Planina Field, a stone's throw away from the Ravbar Tower, in a pocket valley that was once part of a cave, underneath a 65-metre-high precipitous rock face. During high water, you will be greeted by the mighty roar of the Unica River as you pass through the majestic 20-metre-wide and 8-metre-high entrance of Planina Cave. This river is formed 500 metres deeper in the cave, where the 2000-metre-long Pivka branch (Pivka River) that comes from the Postojna Cave and the 2500-metre-long Rak branch (Rak River) that comes from Rakov Škocjan are joined together. In total, the cave is almost seven kilometres long and is Slovenia's most extensive water cave.

Together with the Ravbar Tower, the cave was already mentioned by Janez Vajkard Valvasor in his book The Glory of the Duchy of Carniola. The first person to meticulously study and report on the river and the first person to also make it to the confluence was the Planina chaplain Anton Urbas in 1849. Apart from the unique subterranean confluence, which is one of the largest in Europe, the cave is also known for its large underground chambers, numerous lakes, diverse dripstones and incredible biodiversity. The cave is home to 60 aquatic and 40 terrestrial animal species. The most famous of all is the endemic “human fish” (Proteus anguinus), which can grow to about 30 centimetres and can live up to 100 years. The cave is also home to bats, various crabs, and aquatic snails.

The tour of the cave up to the confluence of the two subterranean rivers lasts a little more than an hour. The longer tour with a boat is possible only at low water levels, therefore, booking in advance is necessary. This adventure takes 4 to 5 hours.

April to September: Sundays and holidays at 3 PM and 5 PM. Saturdays only by prior arrangement.

July and August: every day at 5 PM.

October to March: by prior arrangement 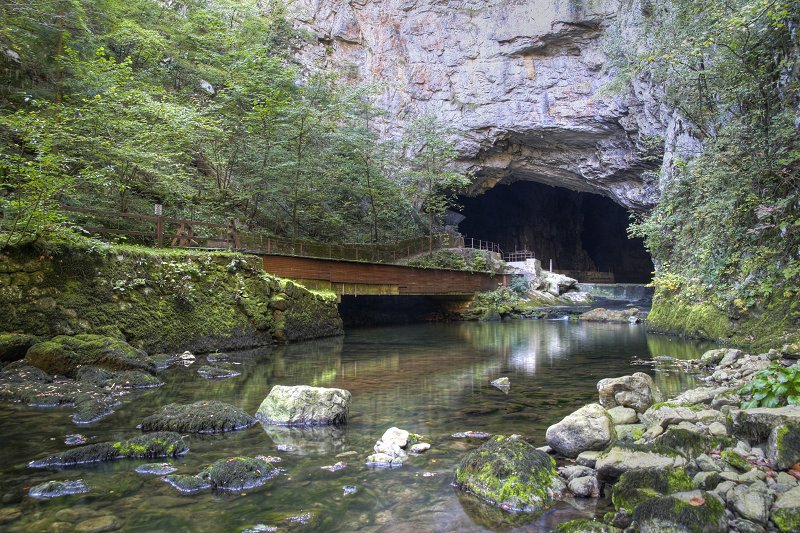