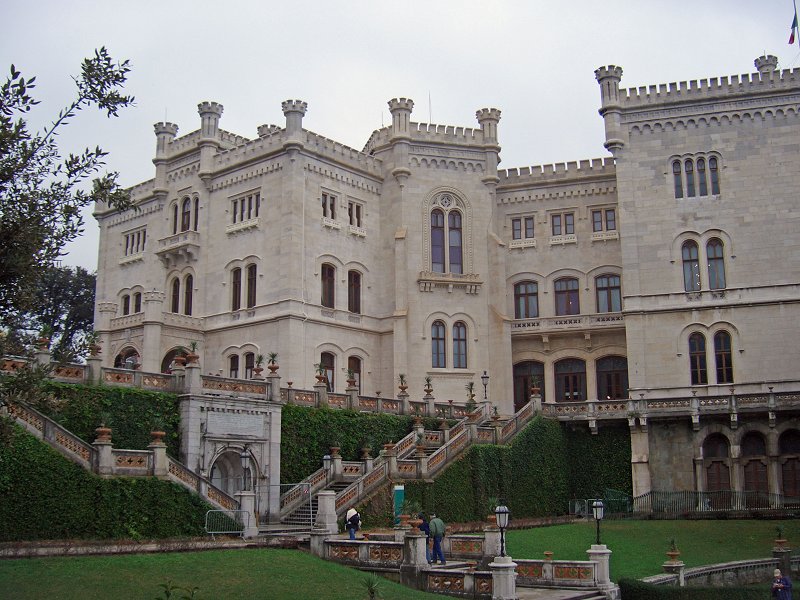 Miramar Castle was built in the 19th century by Archduke Ferdinand Maximilian I of Habsburg-Lorraine (1832-1867), the younger brother of Emperor Franz Joseph and later King of Mexico, to live in it with his wife Charlotte of Belgium. The construction took place from 1856 to 1860 under the leadership of Karl Junker, following the instructions of the Archduke, who wanted the interior of the castle designed like the interior of a ship.

In the castle, do not miss the room decorated with paintings by the Piran-born painter Cesare Dell'Acqua, which depicts events from the life of Maximilian and the history of Miramar. All rooms are still furnished with original fittings, decorations, furniture, and objects from the mid-19th century.

The botanical tropical park that surrounds the castle extends along the seashore and was designed by Archduke Maximilian himself, and is designed on a cliff that was completely bare until then, without any vegetation. The garden was never intended for public use, although the Archduke opened it to the public a few days a week.

Maximilian lived in the castle until his appointment as Emperor of Mexico, where he and his wife Charlotte sailed from Trieste in April 1850 on the ship Novara. In Mexico, Maximilian was shot by Mexican rebels in 1867. His execution left Charlotte completely mentally broken for the rest of her life. For some time she lived in Castellet, a small building in the castle park of the Miramare manor, where she and her husband Maksimilian lived before moving to the manor. She soon returned to her native Belgium, where she died completely depressed and helpless on January 18, 1927, in the Bouchout mansion. She never returned to the Miramare mansion itself. Miramar then served as a temporary residence of the Habsburgs, and in the 1930s, Amadeus Savoy, the 3rd Duke of Aosta, lived on the first floor.

Nearby, don't miss the natural marine reserve Miramar (Area Marina Protetta di Miramare), which is located next to the Miramar Cape, and the Devin Castle, whose construction dates back to the 12th century. At that time, its owners were the Ogle patriarchs, then the Austrian counts, and now the castle is owned by the Turn und Taxis family. Many "eminent" Europeans visited here, such as Liszt, D'Annunzio, and the poet Rilke, who wrote the poetry of the Devin Elegy.

The 3.2-kilometer-long Napoleonic path also invites you to visit. It is said to have been opened by Napoleon's troops in 1797 when they reached Trieste. If you go on a trip with small children, take a drink and a snack with you, because there is nowhere near Prosecco where you can refresh yourself.