BY BIKE ALONG THE PATH OF CASTLES 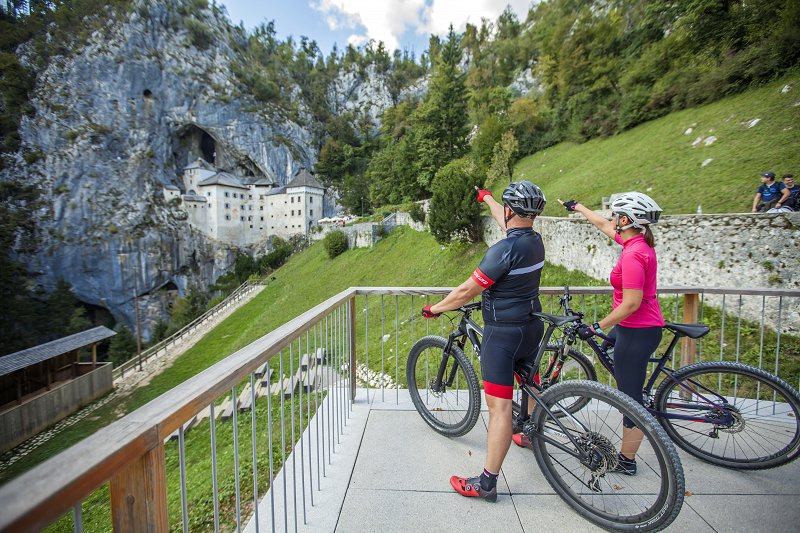 Bike through the landscape of intermittent lakes and along the almost forgotten paths of castle life.

The Castle Trail connects the Military History Park with the former Ravne manor, where young Lipizzaner horses, noble white horses that are the pride of Slovenia, are still being bred. From there, the path leads past the villages of Šmihel and Narin to Šilentabor (751 m), one of the largest fortified complexes in Slovenia at the time of the Turkish invasions.

From here, the cycle path splits into three sections, the Illyrian-Bistrian one that leads past the Kalc castle to Bač, the second to the village of Podtabor, and the third to the tourist farm Janezinovi on Ratečevo Brdo.

In the tourist village of Narin, tourist groups can watch a demonstration of some farming customs and taste various local delicacies.

Kalc Castle, built at the beginning of the 17th century, is known for its owner, the poet and politician Miroslav Vilhar. In 1869, an all-Slovenian camp was held here, attended by as many as 8,000 people. Today, only the tower is preserved from the mighty fortress.

The route continues from Kalc Castle to the bicycle-friendly tourist farm with ECO certification Pri Požarju on Bače.

In the village of Podtabor, above the mighty precipice wall, you can still find the outlines of the traces of the Tabor castle, which the lords of the Prem castle built into the rock as a treasury of grain and other crops to protect them from the Turks.

The route of castles ends at the tourist farm Jenezinovi in the village of Ratečevo Brdo, known for its perfectly prepared homemade dishes seasoned with the taste of the Primorje.

As a hint - from here, only a good 4 kilometers separates you from Prem Castle, which is considered one of the oldest castles in Slovenia. The castle with its imposing architecture has been restored in the style introduced by the last owner, Trieste doctor Bruno Zucculin, who bought the castle as a ruin in 1927 and set up a summer residence there.

The record was produced as part of the Interreg Italia - Slovenia, MerlinCV project. The aim of the project is to increase the tourist attractiveness and visibility of the cross-border region through the creation of innovative and sustainable tourist products. In the foreground is the inclusion of elements of cultural heritage in the tourist offer, as well as the introduction of sustainable content in all areas. The tourism offer created in this way will be available to the tourism industry, local communities, and all interested visitors.