This is and adventure like no other! Paddle across one of the largest underground confluences in Europe just like the first explorers of this largest water cave in Slovenia.

Paddle along the Pivka River into Paradise, the pearl of Planina Cave. After 3.7 km, numerous human fish and beautiful dripstones will keep you company. This unforgettable adventure in the company of a cave guide lasts from 4 to 5 hours, and you will be provided with a helmet, a light, a protective suit and boots.

Planina Cave is located on the south ern fringes of the karstic Planina Field in a pocket valley that was once part of a cave, underneath a 65-metre-high precipitous rock face. Entering the majestic 20-metre-wide and 8-metre-high entrance into Planina Cave at high water, you will be greeted by the loud noise of the Unica River. It is created 500 metres deeper in the cave, where the Rak River, coming from Rakov Škocjan, and the Pivka River, coming from Postojna Cave, are joined and form the Unica River. In total, the cave is almost seven kilometres long and is the largest water cave in Slovenia.

Apart from the unique underground confluence, which is one of the largest in Europe, the cave is known for its large underground chambers, numerous lakes, diverse dripstones and incredible biodiversity. The cave is home to 60 aquatic and 40 terrestrial animal species. The most famous one of all is the endemic human fish (Proteus anguinus), which grows up to 30 centimetres and can live up to 100 years. 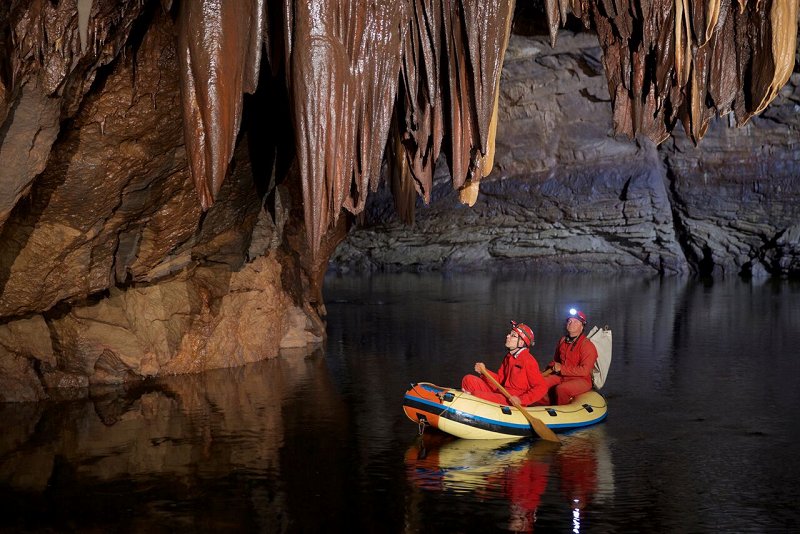 The cave tour can be done by boat only at low water, which is why prior bookings are mandatory. The tour is not suitable for mobility-impaired persons since the tour includes paddling, walking on uneven and slippery terrain and climbing.